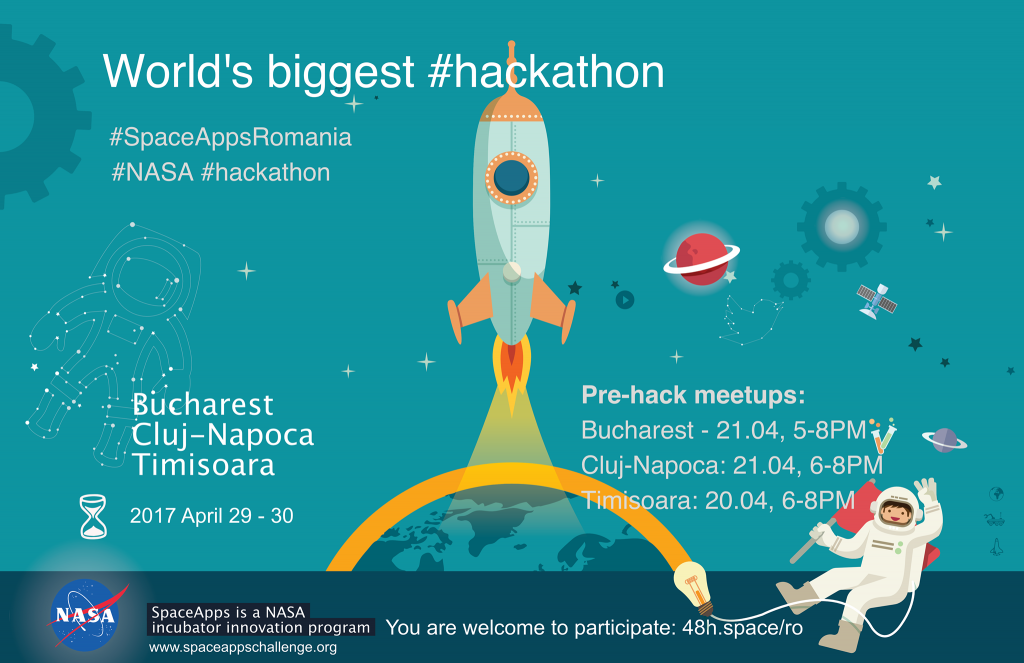 Space Apps is an international hackathon that occurs over 48 hours in cities around the world. In Romania, the event is organized for the first time in Bucharest and Timisoara and in Cluj-Napoca on 29-30 April 2017 and it reached the second edition

The competition is aimed at a wide variety of audiences in different fields: students, students, programmers, scientists, teachers, technologists, artists, designers, engineers, storytellers, students or entrepreneurs.
The theme of this year’s NASA competition is five, centered around our planet: The Earth and Us, Planetary Blues, Warning! Danger Ahead !, Our Ecological Neighborhood, Ideate and Create! The challenges in each category, in a total of 25, can be found on the competition’s website. Participants can choose from here an issue they want to solve according to their field,

Participants can choose from here an issue they want to solve according to their field, degree of difficulty and interest. Participants also select where they want to participate in hackathon and sign up for free.

After the 48-hour hackathon (29-30 April), local juries will designate for each city a maximum of two projects that will be forwarded to the international jury for evaluation, together with a project designated as the one More popular or People’s Choice Award. Winners will be invited to a NASA launch.
Since its inception in 2012, the International Space Apps Challenge has become the biggest hackathon (contest Programming) worldwide. Each year, thousands of participants from different fields, regardless of experience, work together to develop innovative, open-source solutions to issues with global impact, both spatial exploration and social planetary needs, using data sets Public disposition by NASA. The resulting solutions range from mobile applications to games, hardware and more.

The event in Cluj will also have a track on Climate Change and Climate resilience, coordinated by Aries Transylvania and EO ClimLab  project where tools provided by the project will allow rapid development and prototyping of new Earth Observation (EO)-based products aiming to support adaptation and mitigation to climate change across multi-disciplinary societal and business themes.

The previous edition was the biggest one so far, running parallel in 161 cities and bringing together a number of 15,000 participants worldwide, figures we hope to overcome in 2017, said Cristian Dascălu, Chief Innovation Officer SprintPoint Techcelerator and organizer of the competition in Cluj-Napoca.