Latvia is in one of lesser populated areas of Europe, the team behind The Latvia Pavilion notes, and yet two-thirds of the country’s population live in apartment buildings.

Of course it’s a type of building that features across the globe, however it’s also somewhat symbolic to the skylines of Eastern European cities, to me at least – as I remember climbing seven flights of stairs in my elderly grandmother’s apartment building in the eastern corner of Czech Republic. She still lives there, in the concrete, elevator-less block.

Most of these buildings have stood the test of modern time through gripping weather, political conflicts and the tumult of daily life and continue to provide the most important necessity to people across the globe, a home. At the same time, we are now living through an era where the battle for space in the most desirable locations is an expensive hobby and instead developers look to redevelopment, and modern architectural approaches, to turn something old into something brand-spanking new. For the time being then, the apartment is certainly here to stay. 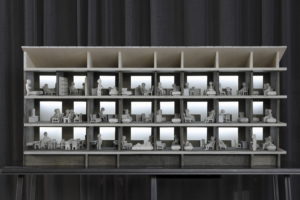 An exhibition at the 16th Venice Architecture Biennial, a creative initiative launched from the heart of Latvia aims to delve further into the thematic walls that constitute the apartment block. Described with the aim of exploring ‘the question of living together in an increasingly complex society, and architecture’s role in providing for it,’ the event looks at the main hurdles that constitute the transitional period of shifting demographics, politics, energy consumption and privacy through four key themes: Distance, Promise, Warmth and Self.

‘Whilst the tendency in politics is to withdraw from the housing question, the exhibition aims to highlight it as an architectural, but also a political, economic and an ecological project.’ 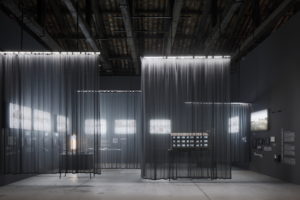 Curated by Matīss Groskaufmanis, an architect based in Rotterdam, alongside Gundega Laiviņa, Evelīna Ozola and Anda Skrējāne, the team looks at how architecture helps to organise society whilst also producing a way of living ‘together and apart’, the title of the exhibition. The space itself captures the sentiments of apartment living through photography, archival material and essays from prominent creatives and political economists whilst also embodying a walled space through dark dividing curtains. Maintaining an underlying message which shows a collective yet also separating approach to apartment living, the art-expo has an unveiling depiction of living within four walls.

Taking place from the 26th May to the 25th November, the event that is hosting the exhibition has this year chosen the theme of ‘Freespace’ and is reaching out to architectural innovation that transcends into ‘the choreography of life’. Latvia’s Minister for Culture has since commented on the innovative ideas of the event:

‘I’m particularly touched by the teams’ analytical approach and the story about the differences and common features of three historic segments’.

The event has also joined forces with EDISON energy company and hopes to promote the importance of energy in the progression of contemporary living.

Together and Apart captures an interesting topic and encourages visitors to look beyond the typical connotations of what makes a home. It is a space for thought, creativity, comfort as well as adjusting to politics and the technology that continues to take precedence in our world. The achievement of these architects has been to bring the relationship between the domestic and wider global impacts, firmly to the forefront.