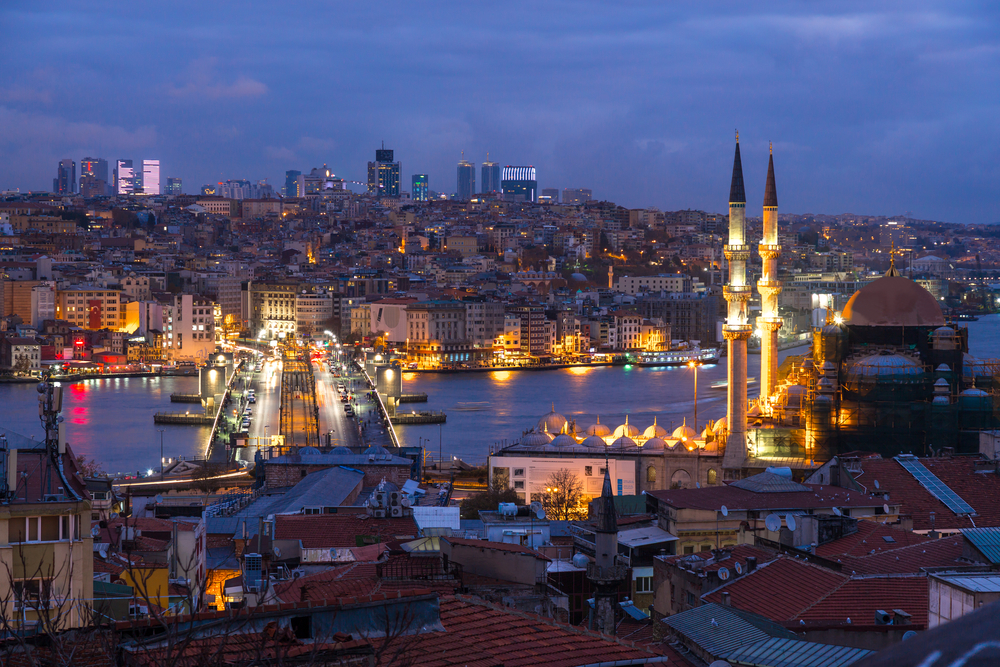 18% of Turkish citizens hold cryptocurrency – more than any European nation, says a new study. In a state with an unpredictable political and economic future, many seem to turn to cryptocurrency as a “safe haven”.

According to recently published data, Turkey is the country with the greatest level of cryptocurrency ownership in Europe.

That assumes of course that you consider Turkey a European nation. Turkey is geographically placed on the crossroads between Europe and the Middle East. Yet on the political map, a rift between Ankara and its European neighbours is clearly widening.  Just a few weeks ago, the European Parliament voted in favour of suspending of EU accession talks with Turkey, citing a poor track record of human rights, the rule of law and media freedom.

Whether this incorporates a wish for closer bilateral relations or not, the financial world has recently put Turkey on the top of the podium when it comes to cryptocurrency investments.

Meltem Demirors, coincidentally a Turkish-American as well as Chief Strategy Officer with digital asset management company Coin Share, took it to Twitter. Turks are in possession of more cryptocurrency than all other European countries, is her verdict. Her conclusion was based on citing information from ING News – a social media news and information outlet belonging to Dutch ING Bank.

The crypto asset management product specialist published a graphic from ING alongside her twitter post demonstrating the comparative level of cryptocurrency ownership across Europe. 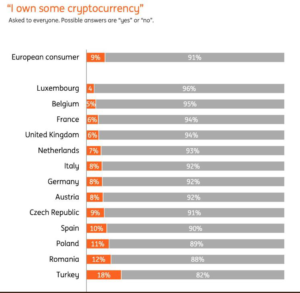 The study confirms Luxembourg, Belgium and France as having the lowest take-up with between 4 and 6% of respondents from those countries acknowledging that they owned cryptocurrency.

Demirors expressed her pride in Turkish investors and startups with the implication that they are responsible for the higher level of cryptocurrency ownership: “As a Turk, I am proud of the Turkish investor and the start-ups because of this success”, stated Demirors.

Yet are investors and startups to praise for this trend? There are several additional factors explaining a recent crypto-rush on the other side of the Bosporus.

It’s likely that the recent currency crisis in Turkey underlies the comparatively higher crypto take-up amongst its citizens. In fact, the Turkish Lira plummeted and lost more than 35% against the U.S. dollar in 2018.  To make things worse, the country experienced inflation in excess of 15% last year.

Recent political clashes with Western government are a big concern for many Turkish citizens, in particular those with dual citizenship such as Demirors. Following a retaliatory measure by the U.S. in suspending visa services, she tweeted: “A sad day.  As a Turkish-American, this makes it incredibly difficult to see my family and friends.”

As a direct consequence of Turkey’s refusal to release Brunson, Trump imposed a doubling of steel and aluminium tariffs on Turkey.

In response to the escalating trade war, the Turkish president seemed to suggest that the country would consider the use of cryptocurrency for international trade. He stated that Turkey “will not give in”: “If you pressure us with the dollar, we will search for other alternatives to carry out our works”, President Erdogan claimed.

Citizens use Crypto as a Safe Haven

The government has not been the only one looking for alternatives in a troubled economy.  With the national currency in free-fall and rampant inflation, citizens started getting squeezed, too.

Many Turkish residents have turned to cryptocurrency in an effort to protect their savings.  Exchange platforms such as paribu.com and BTCTurk facilitated people in exchanging Turkish Lira for Bitcoin or Ethereum.  Purchases were usually made through their bank accounts.

While the Lira is on a downward spiral, its crypto peers seem to attract a growing interest. In fact, from October until the end of the year, trading volume at Turkish cryptocurrency exchanges increased a staggering 37%.

“There’s been a massive 42% increase in visitors to Bitcoin.org from Istanbul, as the Turkish Lira plummets”

“There’s been a massive 42% increase in visitors to Bitcoin.org from Istanbul, as the Turkish Lira plummets”, reads a tweet from August 2018 of a leading Bitcoin developer – known only in the community as ‘Cobra’.

“This is how Bitcoin takes over the world, not through ETF’s [exchange traded funds] and ‘Hodl’, but through replacing fiat currencies as they fall apart.”

Turkey also has one of Europe’s youngest populations.  It’s likely that this too feeds in to the higher usage of cryptocurrency who tend to find it much easier to work with the nascent digital currency than older generations.

Whilst Demirors feels that Turkish startups have a lot to do with the use of cryptocurrency in Turkey, it would seem that there are other significant factors in the mix also.  The demographic profile of the country means it is better disposed towards the use of cryptocurrency. Meanwhile, the 2018 crisis of the Turkish Lira is likely to be the most critical factor.

Cryptocurrencies are still in their infancy, and their potential volatility painfully exposed when Bitcoin crashed 75% of its value in 2017. If almost 1 in 5 citizens in Turkey sees this as a good investment opportunity, there is certainly more at play than a sudden appetite for risk. Compared to the troubled Turkish economy, on a rocky ride since Ankara’s international feuds with the US and others, even a volatile cryptocurrency may be the safer bet.