Which brand is the smartphone or tablet you are reading this article on? In Eastern Europe, this banal question suddenly became the spotlight of an international diplomatic quarrel between the USA and China as controversies over Huawei unfold. Why are global superpowers trying to leverage their influence over Eastern Europe’s telecommunications market?

In the headquarters of Huawei technology, headquartered in the Chinese megacity Shenzen, Eastern Europe might just be synonymous with the corporation’s new headache. And on the other side of the globe, U.S. Secretary of State Mike Pompeo seems to circle the region as a hot issue on its diplomatic agenda.

Thousands of kilometres away from both, Eastern Europe has found itself in the middle of two of the world’s largest feuding economies, the United States and China, in what points to an uncertain future for diplomatic ties with many of the small nations within the region.

What sparked the diplomatic quarrel over Huawei?

The reason for this stems from recent warnings made by U.S. Secretary of State, Mike Pompeo, to nations such as Hungary over their connections to Chinese technology supergiant Huawei.

‘‘If that equipment is co-located in places where we have important American systems, it makes it more difficult for us to partner alongside them,” Pompeo subtly antagonised, according to Technode. What it really means, is that the United States is attempting to coerce eastern European nations into contributing to US attempts to squash Huawei’s global influence.

The United States is currently pursuing the Chinese telecommunications company, pressing charges against Meng Wanzhou, daughter of chief financial officer Ren Zhengfei amid allegations of money laundering and stealing trade secrets. This combined with an overarching trade war with China and fears that the Chinese-based company poses a security risk has led US authorities to seek backup from their European allies.

However, push backs have already appeared particularly from Huawei’s Wanzhou himself who was quoted by the BBC as saying ‘“there’s no way the US can crush us.”

In mid-2018, Huawei technology has risen to become the world’s second-largest mobile vendor, overtaking US competitor Apple. The brand value of the smartphone vendor and telecom equipment provider has been estimated at $8.4 billion by Forbes magazine.

However, transatlantic observers question the independence of one of China’s most significant global technology corporations. Allegations of sharing user information with the Chinese government or building in its products hidden ‘back-door’ technologies for spying has been vehemently denied by Huawei. 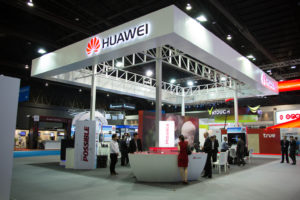 China’s telecommunication exports are booming – but critics from the US claim that corporate giant Huawei is a global threat to security.

What is the Eastern European response?

Reports have already arisen revealing both British and German scepticism over an outright ban on Huawei, with the countries looking to push back on the U.S. demands.  Influence from these two hugely influential European countries might hinder U.S. President’s Trump’s attempts to quash Huawei’s global grip. However, the U.S. still appears to be trying to shape eastern Europe’s position within this complicated narrative.

According to reports from Nikkei Asian Review, it has become clear in recent days that the U.S.will be unwilling to work alongside European counterparts if they do not adhere to their requests. It could go as far as withdrawing security practices that are in place in areas such as Poland and Romania, citing that their status as emerging economies has been a target for Chinese companies.

It was on Wednesday that U.S. Vice-President Mike Pence visited Warsaw, Poland.  On this occasion, Pence also celebrated the eastern European nation’s arrest of a Huawei sales director on charges of spying. What lies in store for countries that adhere to the United States stance on Huawei is continued economic and defence support and the praise of U.S. top officials seems to be the message.

However, authorities in the Czech Republic are fearing reprisal from Chinese business after the country issued a warning against Huawei’s security risks in January 2019, Bloomberg reports. The country, however, appears to be hesitating on an official response. Reports also suggest that Slovakia and Hungary are leaning to not back the U.S allegations, revealing a divide within the region yet also eastern Europe’s metaphorical positions as pawns in the competition against U.S and China.

Why the sudden strategic importance of the region?

For Huawei, there is a billion-dollar business case at stake. In 2017, the value of the smartphone market in Central and Eastern Europe (CEE), Russia, and the CIS was a total of $17.51 billion. Furthermore, these markets are key as the lucrative US telecommunications markets have long been rather obstructed. The sluggish uptake of Huawei in the US was mostly due to U.S. lawmakers viewing it with suspicion and trying to curb its presence on U.S. soil, the Washington Post reports.

The economic and political climate in the CEE region, however, has been much more friendly towards China. The Eastern neighbour is seen, most of all, as a deep-pocketed investor. For example, China’s Belt and Road initiative, a modern offshoot of the ancient Silk Road which would hope to connect over 60 countries through rail and infrastructure development, pointing to larger economic influence for China as a result.

Eastern Europe also maintains strong connections to China as a result of the 16+1 initiative, which according to the website boasts a collective of 11 EU Member States and five Balkan countries who work in partnership with Chinese companies to improve economic growth through infrastructure and green technology.  Among the long list of members are Albania, Bosnia and Herzegovina, Bulgaria, Croatia, the Czech Republic, Estonia, Hungary, Latvia, Lithuania, Macedonia, Montenegro, Poland, Romania, Serbia, Slovakia and Slovenia.

The US, meanwhile, is a key ally when it comes to global security. Eastern European countries are especially relying on its transatlantic ties for balancing Russian interest in the region. For example, Romania hosts an Aegis Ashore missile-defence system operated by the U.S. military, and a similar project is under construction in Poland, suggest reports. 11 Eastern European countries are also members of NATO, including Poland, the Czech Republic and Bulgaria.

The latest diplomatic clash between the US and China played out in the Eastern European telecommunications arena is just the latest indication that technology becomes increasingly political. Is there a new cyber cold war emerging?

No, says Eastern European’s leading ‘cyber-diplomacy’ heavyweight, Estonian cybersecurity ambassador Heli Tiirmaa-Klaar in a recent interview. However, the tech sector is not an apolitical space, she adds.

“Authoritarian countries promote government control over the free Internet, and democratic countries would like to see an open and free cyberspace with free flow of information.”

Geographically and diplomatically caught in between East and West, it remains to be seen in which direction Eastern Europe’s telecommunication and mobile tech sector will swing. The telecom shopfronts plastering the streets of Warsaw, Prague or Bucharest might – quite literally – have political answers in store.