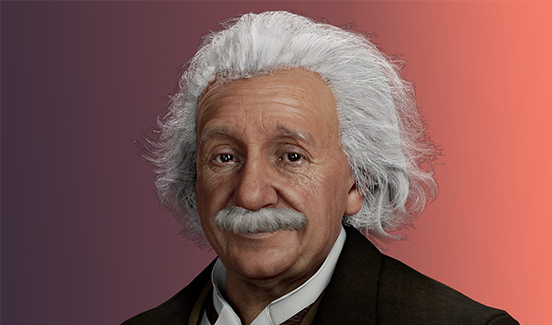 Albert Einstein is one of the most famous people in history, but not all of us know how his theory of relativity has contributed to human endeavors aimed at understanding the universe.

But there is another thing we may not know about the incredibly genius physicist who is usually celebrated as the most recognizable face of science: How he sounded like!

One reason is many of us have never stumbled upon one of his speeches as historical recordings of his voice are very limited and of poor quality.

If you are now curious to not only know how Einstein may have sounded but also interact with him and ask him questions about himself, his world views, concepts of physics, or anything else you wish, two imaginative companies have got you covered.

In an out-of-this-world project, Aflorithmic—a startup that is powering a new generation of hyper-personalized, voice-first solutions for brands and enterprises—partnered with digital human creators UneeQ to bring Einstein back to life in a digital body.

The hair-raising experience, which is the first of its kind, is sure to immerse the audience in a mesmerizing world that shows artificial intelligence at its best.

Although the development teams say they did not have a solid frame of reference for how the legendary scientist sounded in real life, the two companies do not expect too many users to worry much about the accuracy of Einstein’s voice.

“What they do care about is being able to understand him easily and that they feel like they are interacting with Einstein,” Aflorithmic wrote in a blog post, explaining that they used all the input available to design a voice character that people would recognize as Einstein.

“The result is a voice character that is based on the character traits we expect when we think of Einstein. He has a German accent, speaks in a friendly and slightly strange manner, and he is reflective about his role in life. He also has a dry sense of humor, which is represented in the way he speaks.”

From a technological perspective, there was another thing that was key in order to make the digital Einstein work: Enabling it to reply in a very short amount of time so that the experience would actually feel like a conversation.

To achieve this goal, the turnaround of the input text from the computational knowledge engine to Aflorithmic’s API would have to be rendered with Einstein’s voice in near real-time.

“After giving all we had to solve this challenge we got the response time down from 12 seconds to under 3 seconds, an improvement of 400% realized in only 2 weeks,” the blog post reads.

Aflorithmic believes the project shows the potential of conversational AI beyond chatbots and customer service.

“Education can become more engaging and comprehensive, social commerce will help customers find the product that best fits their needs, and even loneliness and therapy could be revolutionized by conversational AI,” the company said, adding that voice cloning plays a major role in transforming the future of this frontier technology.