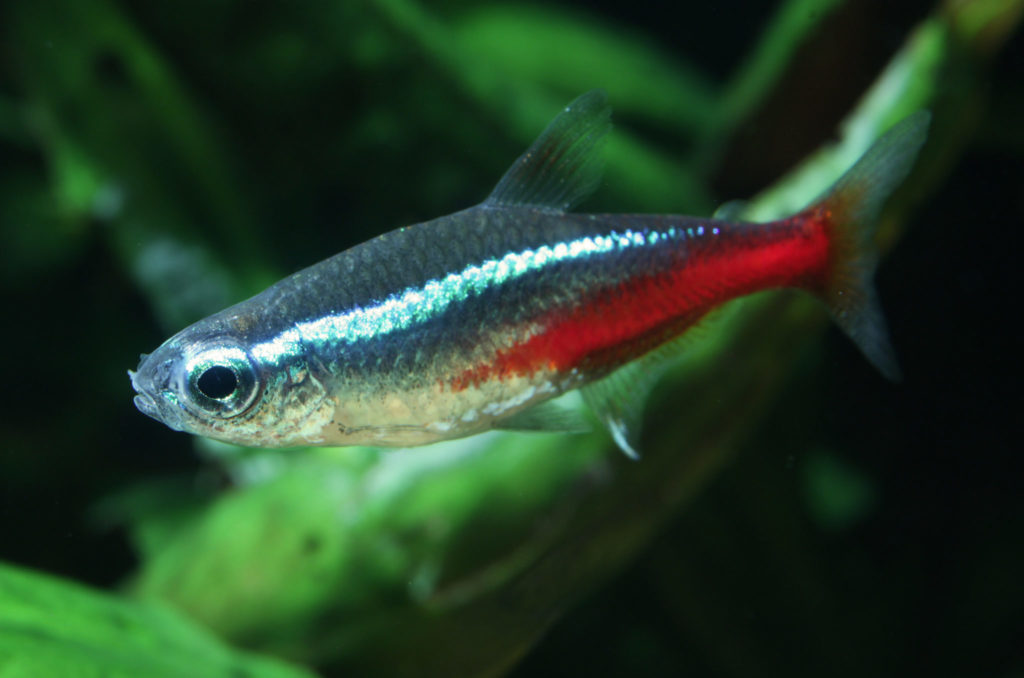 Many technological and scientific breakthroughs have been inspired by nature.  Oftentimes, researchers and technologists attempt to replicate nature and that seems to be the case in this instance.

According to a press release published on Wednesday, the team of researchers were inspired in creating the material by the flashing colours of the neon tetra fish.  The camouflaged nature of the fish served as the area of study as the team sought to replicate the characteristic through the medium of a synthetic material.

The new material can morph its colour through the use of a magnetic field which changes the orientation of a formation of nanocolumns.  The tetra neon fish has the natural ability to alter its brightly coloured scales by adjusting the angle of microscopic platelets in its skin.

In a research paper published to ACS Nano titled “Magnetically Actuated Dynamic Iridescence Inspired by the Neon Tetra”, the NCSU research team sets out its thesis for the newly designed material.  Zhiren Luo, a PhD student and team member commented on the study:

“For this proof-of-concept study, we have created a material that demonstrates a similar ability [to the neon tetra fish].  In particular, we have shown that we can shift the colour of the material by using a magnetic field to change the orientation of an array of nanocolumns.”

Inherent in the newly developed material are four layers incorporating a silicon substrate coated with a polymer which has been embedded with iron oxide nanoparticles. The colour-changing material consists of a regular array of micron-wide pedestals which results in that polymer layer resembling a Lego brick.

The middle layer holds the iron oxide particles on a free-floating basis within an aqueous solution which, in turn, is held in place by a transparent polymer cover.

There is strong military interest in active camouflage technologies such as this one.

Adaptive camouflage such as diffused lighting systems have been used militarily as far back as the second world war on ships and aircraft.  Efforts at camouflage have often found their origins in nature. Octopods and cuttlefish have an impressive ability to change their appearance.  Scientists have previously replicated that ability in order to produce an adaptive camouflage system.  That research was sponsored by the U.S. Navy.

The U.S. Army and Air Force have funded a similar study by a group of Cornell University researchers working with the Marine Biological Laboratory in Massachusetts.  Scientists at the University of California invented a material – inspired by cephalopods – that has the ability to become invisible to infrared night vision cameras.  Once again, it’s easy to recognise the military use case.

In the European biotechnology sector too, researchers and scientists are in hot pursuit of design inspiration in the natural world in an attempt to bring about scientific innovation.  Jellagen, a marine biotech company based in Wales is seeking to extract jellyfish derived collagen, a substance that has potential in the field of regenerative medicine.

Author of the study, Chih-Hao Chang remarked on the next research stages:

“Next steps for us include fine-tuning the geometry of the column arrays to improve the purity of the colours.  We are also planning to work on the development of integrated electromagnets that would allow more programmable colour shifts.”

It’s not clear if funding has been provided to NCSU by any branch of the U.S. Department of Defence.  There may well be industry and domestic use cases for camouflage technology such as this. To that end, the research team has identified potential in terms of reflective display applications.  However, with dynamic camouflage being the other area of application they have identified, a military use case seems the logical primary consideration for the time being.